A New class in Newport

Newpor tstudio has exploded! - new students are filling up the Hall nicely and they are having a great time getting to know each other and creating some fantastic characters, situations and plots!
With such success, we are delighted to be able to offer a new, separate class dedicated to our Lower Primary children (whose voices were going a  little unheard in the energetic class of older children.)
Our new class will meet at 4.30 every Thursday in Newort Church Hall and is designed to appeal to our younger students: there will be lots of dressing up, lots of talking and lots of pretending, and through it all the children will learn how tocope with school and all the changes it brings, to develop confidence in confronting new situations, and how to make new friends - lots of them!
Posted by Barbara at 02:58 No comments:

OFF TO SHINE IN AUSTRALIA!
Three of our Youth Theatre students said goodbye to the Scottish Academy this term to prepare for a new life in Australia.
Sarah Walker and her brothers Matthew and Alexander, have been members of the Academy in Kinross since 2002, clocking up over 26 years of Drama between them!! - that's a lot of Saturday mornings!
We are very sad to see them go, but they are off to join the Helen O'Grady Drama Academy in Australia, where they willl transfer to the Adelaide branch, run by Zita Splawinski. Enjoy the sunshine!


NIKKI AND THE GANG
We are very proud of two of our students, Felix Principe Gillespie and Elisabeth Flett, who secured places in the Scottish Youth Music Theatre's production of "Nikki and the Gang" at the Lemon Tree Theatre in Aberdeen.
This production, part of the Aberdeen International Youth Festival,  included young people from as far afield as Northern Ireland, Southern England and Wales. Written by Alan Bisset, and profesionally directed and choreographed, "Nikki and the Gang" played to  full houses for its three performances. Set on a remote island somewhere off the coast of Scotland, peopled with eccentric characters, the play told off an intrepid gang, loosely based on "The Famous Five", who rooted out a dastardly mystery and nasty skulduggery, and with flair, gymnastics, a song and a dance, restored calm and peace to the island - with a noisy ceilidh.
Felix and Elisabeth spent two weeks resident  in Aberdeen preparing for the production, "a truly amazing experience".


JAMES ROTTGER
James is another graduate of the Helen O'Grady Drama Academy starting classses with us at the age of 8 and continuing for five and a half years.
After completing his degree in Acting and Performance at Queen Margaret College, he has had the opportunity of several acting roles, and will soon be seen in "Gary Tank Commander" on Scottish television in the middle of September.
This will be the third series of this very funny comedy, and James has filmed a total of six episodes. Well done, James!

A NEW TERM!
Our new term starts on Saturday 18th August and we are looking forward to a splendid autumn of Drama - improvisations, mimes to music, dress up days, miniscripts, group work, conversations, new friends and fun.
Posted by Barbara at 08:24 No comments:

One of our students has starred in an advertising video for an energy company! Shot on a beautiful Fife beach last autumn, the ad is to be used as promotional material within the energy industrry and Harry was chosen to be the young face of the future!
Despite it being a chilly day on a windy beach, Harry showed excitement, interest and energy as he ran up and down the beach, flying a kite, waving a windmill amd skimming stones.
Well done, Harry! 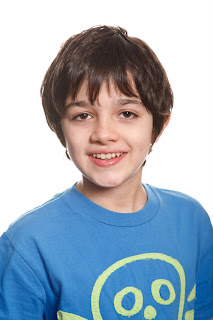 You can see the video at http://www.senergyworld.com/
Posted by Barbara at 02:15 No comments:

REACHING FOR THE STARS!

Three of our talented and enthusiastic students have attended auditions in the past two weeks and have shown how confident, articulate and friendly they are!
Jessica, who is just 3, was auditioned in Falkirk for a part in the new CBeebies series, "Woolly" and made a big impression on the director, who said she was "a lovely wee girl" - we think so, too! 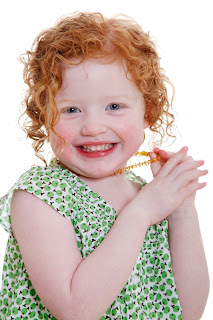 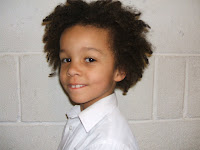 Aislinn and Caleb travelled to Edinburgh to audition for parts in the Festival Theatre's Christms production of "The King and I" and had a great time - and so did their mums! Well done to you all!

RELAXING AT THE END OF A HOLIDAY.... 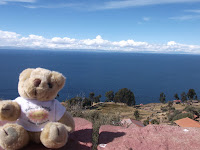 What a wonderful holiday Baby Grady Bear has had - so many dramatic adventures, dramatic friends and dramatic discoveries.....and now it is time for him to relax before he says good-bye to Peru and returns to Scotland
AND HE CAN'T WAIT!!
Because next week Drama classes will start again, and he has missed you all - he wants to hear all about your wonderful holidays - did you meet some furry friends, climb a mountain, sail in a boat, sleep in a tent? Did you get very hot, get very wet, get very excited?   Did you see some Drama, go to a play, join in a performance? Did you talk to lots of new people, make new friends, eat new food, ride a horse, a donkey, travel in a plane, a bus, a train or a car?
SEE YOU AT DRAMA and you can tell him all about it!
Classes start the week beginning 20th August - see you all there!
Posted by Barbara at 02:11 No comments:

FURRY FRIENDS - AND ANOTHER SURPRISE 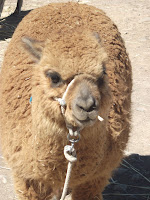 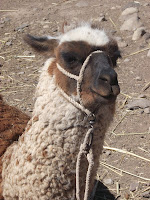 In his search for bears in Peru (where Paddington Bear came from), Baby Grady Bear has met lots of furry friends......but not yet a TEDDY BEAR 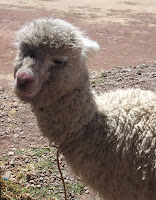 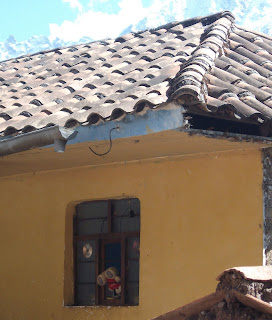 HATS OFF TO PERU! 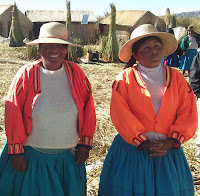 Hats are very important in Peru - everyone likes to wear one - and some are splendid!
There are bowler hats...straw hats...wool 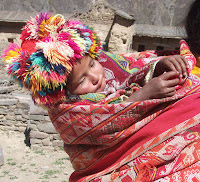 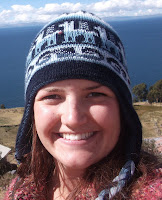 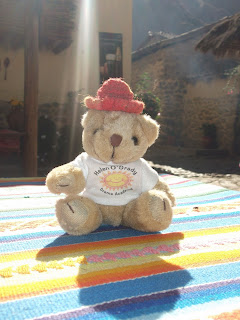